Sondela, Having a voice as a Valued Citizen, making accountability a priority! 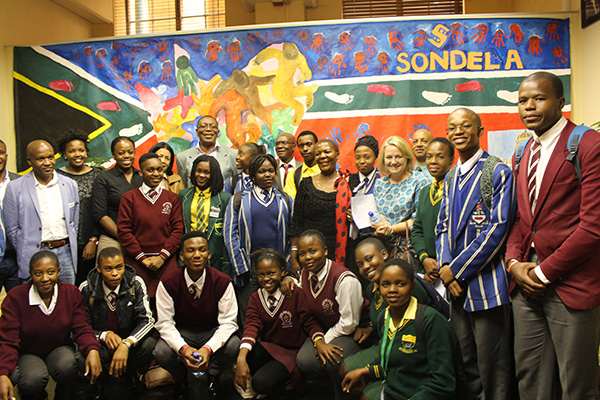 Gauteng Provincial Legislature Deputy Speaker , Mr. U. Moiloa and partners with our learners at the Sondela Launch

Sondela enabled 166 learners from 5 high schools: Randfontein, Westonaria, TM Lehlake, Olivenhoutbosch and Forte High Schools. We engaged as citizens in the community on two dialogue sessions, followed by a creative session where the values and moral belief systems were transferred onto canvases in the production of 25 visual artworks.

The theme addressed: In a state of economic turmoil, as citizens are we going to carry on blaming the “other” – government, foreigners, load shedding, poverty and one another – or are we going to take responsibility in creating a platform to treat self and others with dignity and honour what we can do together as citizens?

Our learners understood that social cohesion encompasses past and present. It connects the here and now and the future. It warned of the long arduous journey we all travel – through “Sondela dialogue” we learnt about our history and how to procure the future we want. Our youth firmly believes it is time to stand in the gap of fundamental values like freedom of expression, care with empathy for fellow human beings to build trust in our society; accountability, dignity. Our learners proposed a budget speech delivered quarterly to monitor government expenditures which addresses the needs of people, voting for a candidate to stand as President instead of a party for our national election in addressing the race issue. Finally, they believe that we can once more trust in the slogan “It takes a village to raise a child” a reality where I, you, and we care enough to enable our children to grow in a safe environment.